Before launching training jobs, DGL requires the input data to be partitioned and distributed to the target machines. For relatively small graphs, DGL provides a partitioning API partition_graph() that partitions an in-memory DGLGraph object. It supports multiple partitioning algorithms such as random partitioning and Metis. The benefit of Metis partitioning is that it can generate partitions with minimal edge cuts to reduce network communication for distributed training and inference. DGL uses the latest version of Metis with the options optimized for the real-world graphs with power-law distribution. After partitioning, the API constructs the partitioned results in a format that is easy to load during the training. For example,

will outputs the following data file.

Chapter 7.4 Advanced Graph Partitioning covers more details about the partition format. To distribute the partitions to a cluster, users can either save the data in some shared folder accessible by all machines, or copy the metadata JSON as well as the corresponding partition folder partX to the X^th machine.

Using partition_graph() requires an instance with large enough CPU RAM to hold the entire graph structure and features, which may not be viable for graphs with hundreds of billions of edges or large features. We describe how to use the parallel data preparation pipeline for such cases next.

To handle massive graph data that cannot fit in the CPU RAM of a single machine, DGL utilizes data chunking and parallel processing to reduce memory footprint and running time. The figure below illustrates the pipeline: 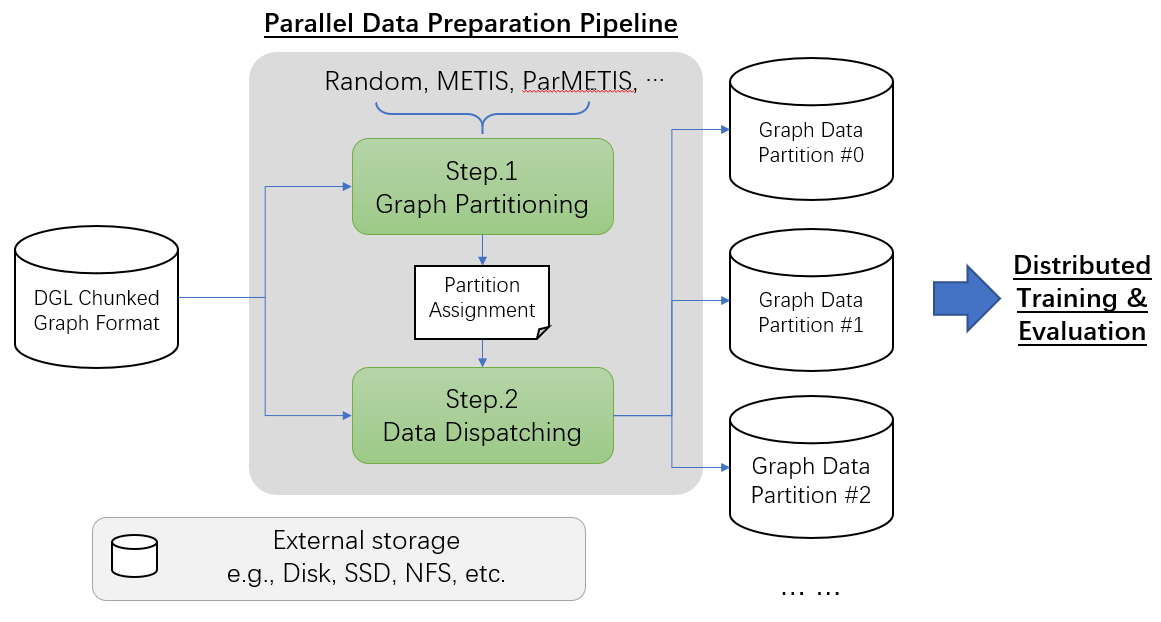 The whole pipeline is modularized so that each step can be invoked individually. For example, users can replace Step.1 with some custom graph partition algorithm as long as it produces partition assignment files correctly.

To run the pipeline, DGL requires the input graph to be stored in multiple data chunks. Each data chunk is the unit of data preprocessing and thus should fit into CPU RAM. In this section, we use the MAG240M-LSC data from Open Graph Benchmark as an example to describe the overall design, followed by a formal specification and tips for creating data in such format.

The MAG240M-LSC graph is a heterogeneous academic graph extracted from the Microsoft Academic Graph (MAG), whose schema diagram is illustrated below:

Its raw data files are organized as follows:

The graph has three node types ("paper", "author" and "institution"), three edge types/relations ("cites", "writes" and "affiliated_with"). The "paper" nodes have three attributes ("feat", "label", "year"'), while other types of nodes and edges are featureless. Below shows the data files when it is stored in DGL Chunked Graph Format:

The metadata.json stores all the metadata information such as file names and chunk sizes (e.g., number of nodes, number of edges).

There are three parts in metadata.json:

The edge index files contain edges in the form of node ID pairs:

In general, a chunked graph data folder just needs a metadata.json and a bunch of data files. The folder structure in the MAG240M-LSC example is not a strict requirement as long as metadata.json contains valid file paths.

Depending on the raw data, the implementation could include:

To avoid running into out-of-memory error, it is recommended to process graph structures and feature data separately. Processing one chunk at a time can also reduce the maximal runtime memory footprint. As an example, DGL provides a tools/chunk_graph.py script that chunks an in-memory feature-less DGLGraph and feature tensors stored in numpy.memmap.

This step reads the chunked graph data and calculates which partition each node should belong to. The results are saved in a set of partition assignment files. For example, to randomly partition MAG240M-LSC to two parts, run the partition_algo/random_partition.py script in the tools folder:

, which outputs files as follows:

DGL provides a dispatch_data.py script to physically partition the data and dispatch partitions to each training machines. It will also convert the data once again to data objects that can be loaded by DGL training processes efficiently. The entire step can be further accelerated using multi-processing.

An example IP configuration file is as follows:

During data dispatching, DGL assumes that the combined CPU RAM of the cluster is able to hold the entire graph data. Moreover, the number of machines (IPs) must be the same as the number of partitions. Node ownership is determined by the result of partitioning algorithm where as for edges the owner of the destination node also owns the edge as well.