In real-world tasks, many graphs are very large. For example, a recent snapshot of the friendship network of Facebook contains 800 million nodes and over 100 billion links. We are facing challenges on large-scale training of graph neural networks. 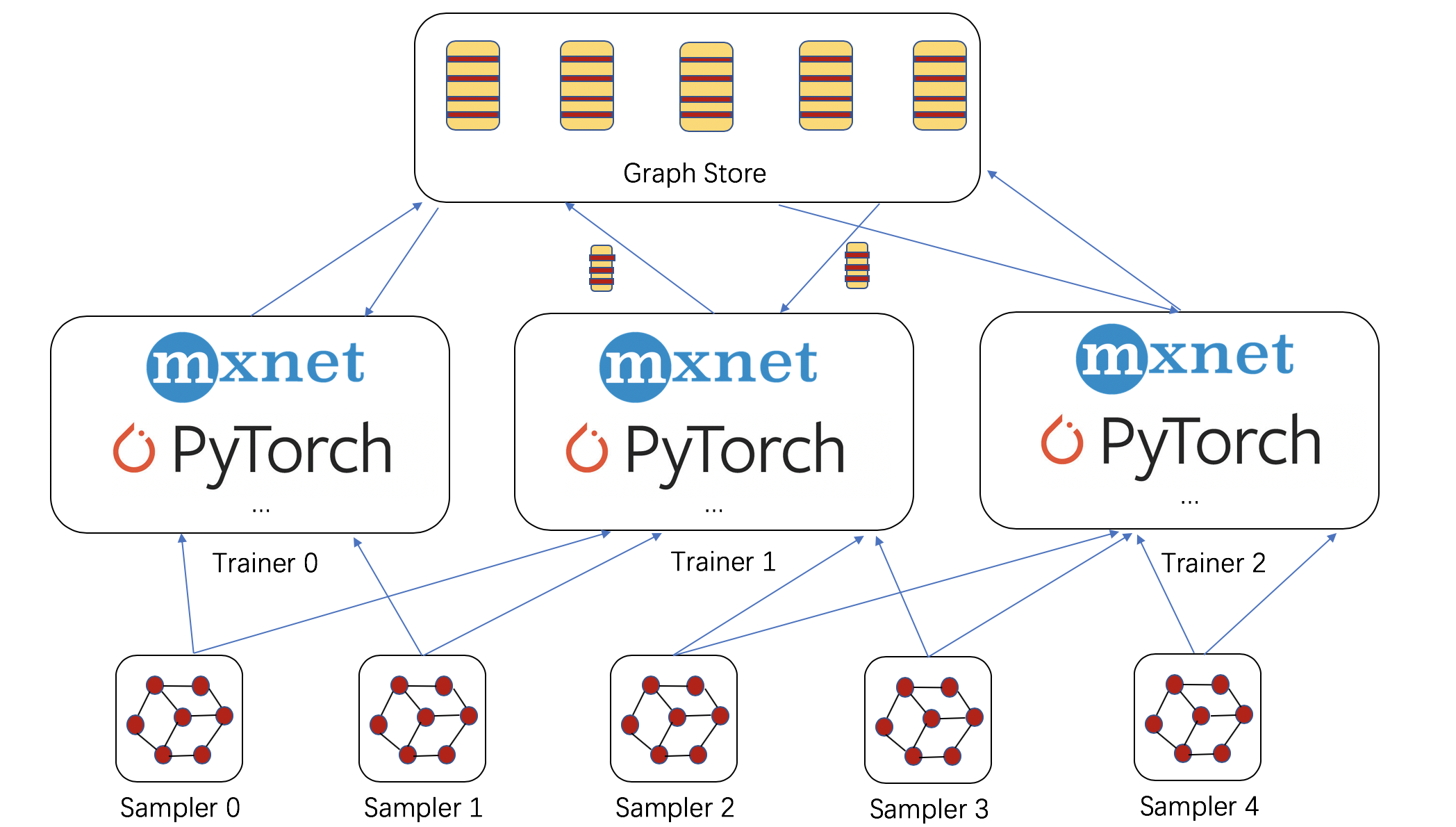 The sampling tutorial shows the detail of sampling methods and how they are used to train graph neural networks such as graph convolution network. As a recap, the graph convolution model performs the following computation in each layer.

In addition to the approximation, Chen et. al. applies a preprocessing trick to reduce the number of hops for sampling neighbors by one. This trick works for models such as Graph Convolution Networks and GraphSage. It preprocesses the input layer. The original GCN takes \(X\) as input. Instead of taking \(X\) as the input of the model, the trick computes \(U^{(0)}=\tilde{A}X\) and uses \(U^{(0)}\) as the input of the first layer. In this way, the vertices in the first layer does not need to compute aggregation over their neighborhood and, thus, reduce the number of layers to sample by one.

update_all in the graph store runs in a distributed fashion. That is, all trainers need to invoke this function and take part of the computation. When a trainer completes its portion, it will wait for other trainers to complete before proceeding with its other computation.

After we initialize node data, we train GCN with control-variate sampling as below. The training code takes advantage of preprocessed input data in the first layer and works identically to the single-process training procedure.

The complete example code can be found here.

After showing how the shared-memory graph store is used with control-variate sampling, let’s see how to use it for multi-GPU training and how to optimize the training on a non-uniform memory access (NUMA) machine. A NUMA machine here means a machine with multiple processors and large memory. It works for all backend frameworks as long as the framework supports multi-processing training. If we use MXNet as the backend, we can use the distributed MXNet kvstore to aggregate gradients among processes and use the MXNet launch tool to launch multiple workers that run the training script. The command below launches our example code for multi-processing GCN training with control variate sampling and it runs 4 trainers.

It is fairly easy to enable multi-GPU training. All we need to do is to copy data to a right GPU context and invoke NodeFlow computation in that GPU context. As shown above, we specify a context right_context in copy_from_parent.

Given the configuration above, NUMA-aware multi-processing training can accelerate training almost by a factor of 4 as shown in the figure below on an X1.32xlarge instance where there are 4 processors, each of which has 16 physical CPU cores. We can see that NUMA-unaware training cannot take advantage of computation power of the machine. It is even slightly slower than just using one of the processors in the machine. NUMA-aware training, on the other hand, takes about only 20 seconds to converge to the accuracy of 96% with 20 iterations. 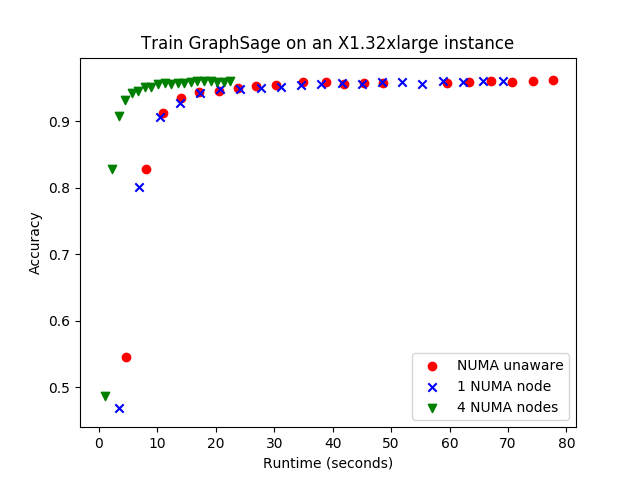 For many tasks, we found that the sampling takes a significant amount of time for the training process on a giant graph. So DGL supports distributed samplers for speeding up the sampling process on giant graphs. DGL allows users to launch multiple samplers on different machines concurrently, and each sampler can send its sampled subgraph (NodeFlow) to trainer machines continuously.

To use the distributed sampler on DGL, users start both trainer and sampler processes on different machines. Users can find the complete demo code and launch scripts in this link and this tutorial will focus on the main difference between single-machine code and distributed code.

For the trainer, developers can easily migrate the existing single-machine sampler code to the distributed setting seamlessly by just changing a few lines of code. First, users need to create a distributed SamplerReceiver object before training:

The SamplerReceiver class is used for receiving remote subgraph from other machines. This API has three arguments: parent_graph, ip_address, and number_of_samplers.

After that, developers can change just one line of existing single-machine training code like this:

Here, we use the code for nf in sampler to replace the original single-machine sampling code:

All the other parts of the original single-machine code is not changed.

The figure below shows the overall performance improvement of training GCN and GraphSage on the Reddit dataset after deploying the optimizations in this tutorial. Our NUMA optimization speeds up the training by a factor of 4. The distributed sampling achieves additional 20%-40% speed improvement for different tasks. 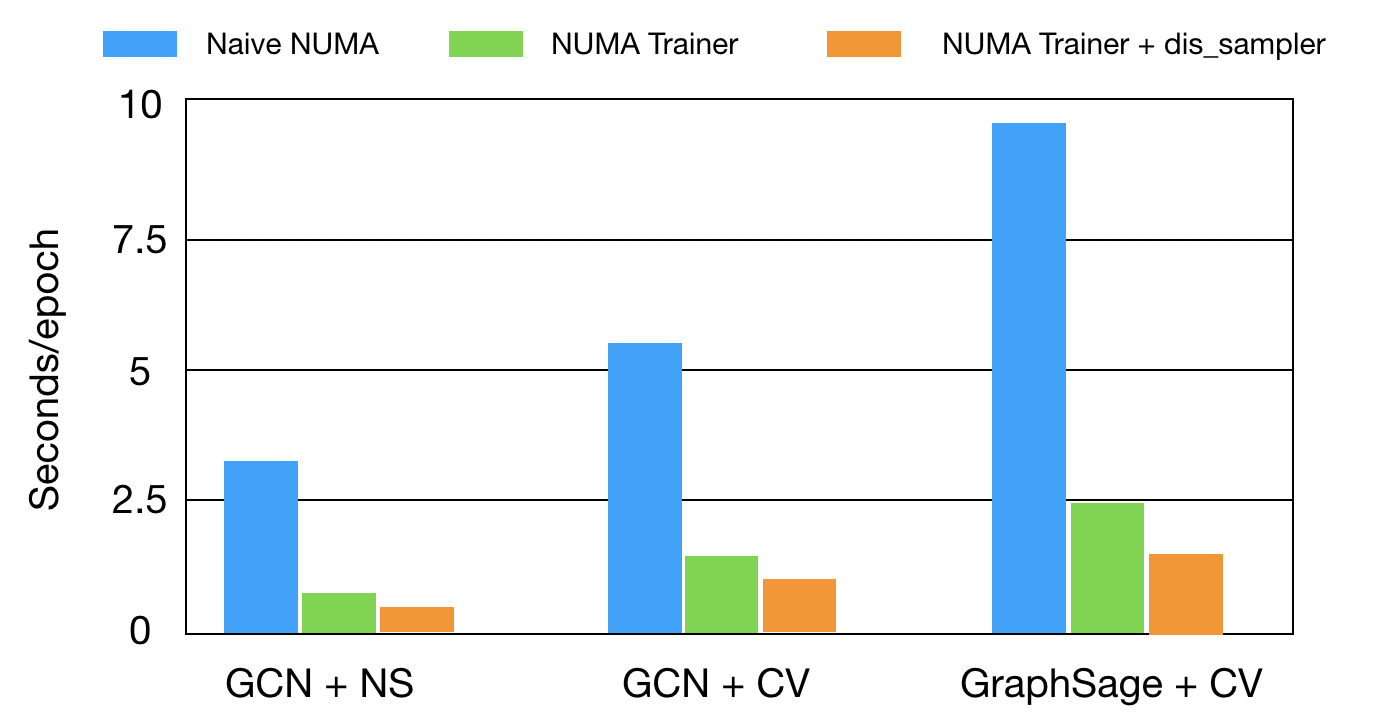 Finally, we would like to demonstrate the scalability of DGL with giant synthetic graphs. We create three large power-law graphs with RMAT. Each node is associated with 100 features and we compute node embeddings with 64 dimensions. Below shows the training speed and memory consumption of GCN with neighbor sampling.

We can see that DGL can scale to graphs with up to 500M nodes and 25B edges.